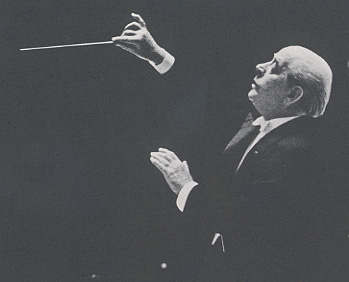 No different than any daily work-place relationship between a superior and those serving under him, the association between Eugene Ormandy and the members of The Philadelphia Orchestra for the years that he performed as it’s music director, had it’s tedious moments. Particularly in Ormandy’s last decade-and-a-half here. The following was born of that relationship. Members of our city’s esteemed musical organization sat at their music stands during rehearsals and with tools as critical as their instruments — the pencils normally used for making notes and interpretational marks on their scores — jotted down the maestro’s linguistic flubs and faux pas. In time, these utterances became more numerous than expected, the orchestra members all the while proving nearly as mischievous as young school students. Though these gems have never seen the light of day, in that very close-knit community, they have come to be known as “The Ormandy Quotes”. Witness History: “Now we will play something we never played before as an encore. I didn’t mean that. Mahler wrote it as the third movement of his 4th symphony, I mean the 4th movement of his 1st symphony- we play it third. The trumpet solo will be played by our solo trumpet player. It’s named “Blumine” which has something to do with flowers.”

On the occasion of the death of David Oistrakh — “I told him he’d have a heart attack a year ago but unfortunately he lived a year longer.”

“I conduct faster so you can see my beat.”

“The next movement is still in the factory.”

“Think of your girlfriend or boyfriend or whom you want to.”

“At every concert I’ve sensed a certain insecurity about the tempo. It’s clearly marked 80, uh, 69.”

“All of you are ready to start so I must be ready.”

“It’s not important. It’s only important when it’s late.”

“It’s difficult to remember if you haven’t played it before.”

“I’m conducting slowly because I don’t know the tempo.”

“I don’t want to repeat this a hundred times. When you see crescendo it means p.”

“I cannot give it to you so try to watch me.”

“I was trying to help you so I was beating wrong.”

“The minute you slow down a fraction you’re behind.”

“Did you play? It sounded very good.”

“I never say what I mean, but I always manage to say something similar.”

“Percussion, a little louder. (“We don’t have anything.”

“As pp as possible — even softer.”

“Let me explain what I do here — I don’t want to confuse you more than absolutely necessary.”

“Why do you always insist on playing while I’m trying to conduct.”

“We can’t hear to balance it yet because the soloist is still on the airplane.”

“I think one thing and say another.”

“Congratulations to each and every one of you for the concert last night in New York and visa-versa.”

“Watch me closely, only one can spoil it.”

“It’s so legato it’s difficult to splice — Sibelius was famous for that.”

“I can see none of you are smugglers, that’s why it’s so loud.”

“Tonight is the night when 300 years ago Johan Strauss was born. That’s why this year is so important.”

“Something went wrong. It was correct when I studied it.”

“There has been confusion since I stood here 35 years ago.”

“We’ll see in a minute right away. During the rests — pray.”

“Don’t make too much of it. You might get lost.”

“It has no rhythm, but it will, because it’s so much faster.”

“I don’t get into politics, general or musical, but just call me if you get jury duty. Even in Jersey I was able to help somebody.”

“More basses because you are so far away.”

“Relax, don’t be nervous. My God it’s the Philadelphia Orchestra.”

“You’re looking at me so strangely.”

“I purposely didn’t do anything and you were all behind.”

“It can be either too soon or too late or not together.”

“I go forward in tempo.”

“There is a shadow on every page.”

To the woodwinds: “There are no woodwinds at number 6.”

“I know it – that’s why”. “Who is sitting in that empty chair?” Bass: “What note do I have?” “The score is written out the way you hear it – the way you play it – and I have to transpose back to normal.”

“I guess you thought I was conducting, but I wasn’t.”

“The notes are right, but if I listened they would be wrong.”

“You have to do two things. Watch it and me.”

“Even if the right instruments are not here, we will play it anyway. It’s only a short piece.”

“I am thinking it right, but beating it wrong.”

“I cannot conduct it better than I can count.”

“Intonation is important, especially when it is cold.”

“It is not together, but the ensemble is perfect.”

“I purposely gave you a slower tempo because I did not know what the right one was.”

“Suddenly I was in the right tempo, but it wasn’t.”

“Brass, stay down all summer.”

“My bowings are only general.”

“This is the one bar you should take home.”

“Without him here, it is impossible to know how fast he will play it, approximately.”

“We do not know when he is coming. He is coming tomorrow.”

“Someone come too sooner.”

“After one performance it will be perfect.”

“That’s the way it was every time, I studied it.”

“Serkin was so sick, he almost died for three days.”

“We have to play it longer because there no letters or numbers.”

“Thank you for your cooperation and visa-versa.”

“Don’t think you are looking at me, because you are not.”

“I don’t mean to make you nervous, but unfortunately I have to.”

“Even when you are not playing, you are holding me back.”

“He was listening so I don’t remember.”

“I know this music by memory, not from the music.”

“I always feel I do it too slow, but then others do it faster.”

“Chorus, I am sorry you have to stand so long, but you can stand again.”

“Beauty is less important than quality.”

“There is a number missing, I can see it.”

“That was perfect. It was just the opposite from what I said yesterday.”

“I need one more bass less.”

“Yes, the mutes are on already. You took then off in the beginning.”

“You know me, I am a maniac when it comes to rhythm.”

“I forgive you for shaving yourself.”

“It is not as difficult as I thought it was, but is harder than it is.”

“It’s marked accelerando, so you push ahead!”